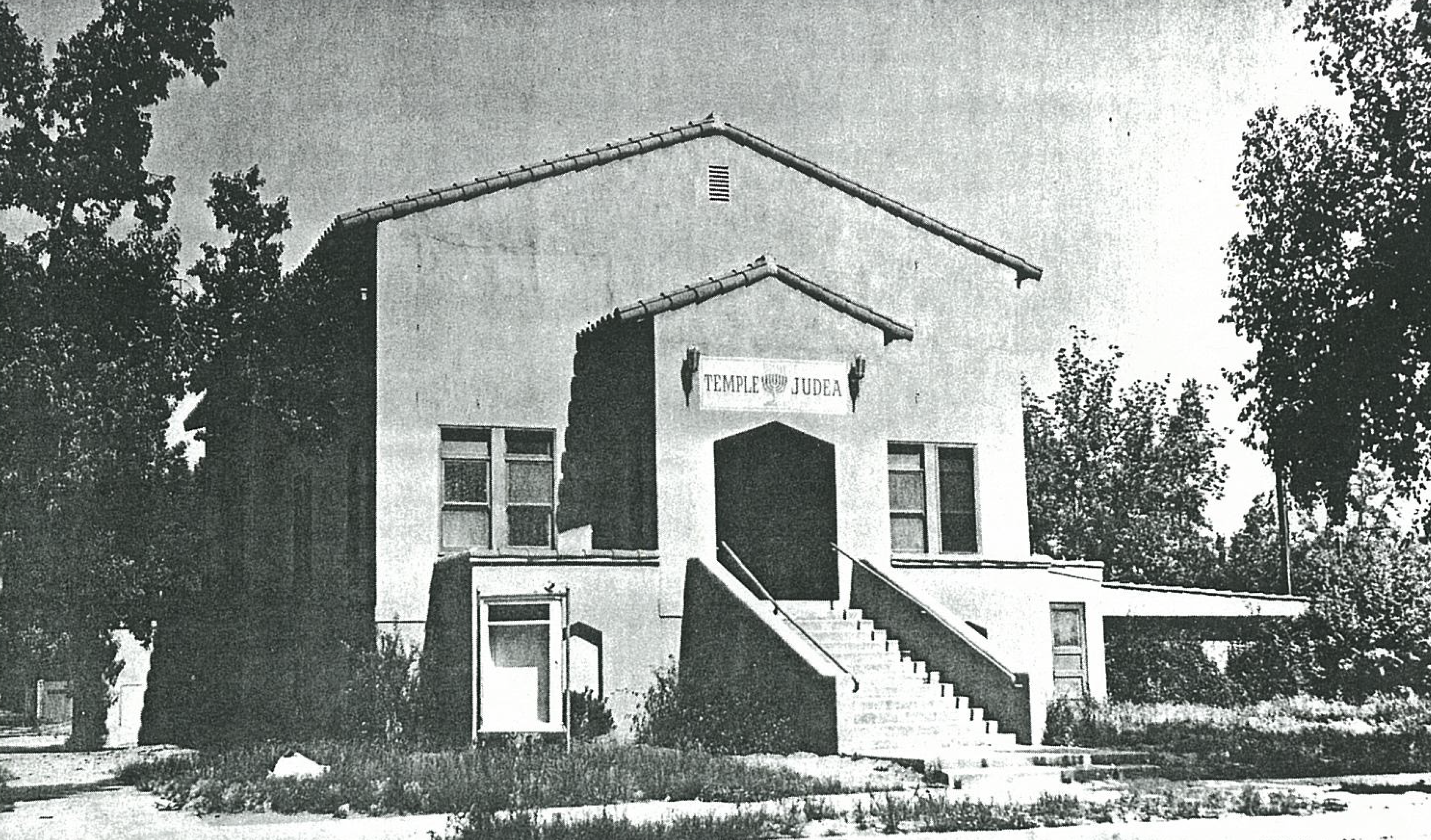 Temple Judea was founded in 1952 by seventeen Jewish families seeking to build a home for Reform Jewish worship, study and fellowship in the West San Fernando Valley. The group's objective was to create a warm and haimish shul with open doors and open hearts. The temple founders held their first organized meeting at the home of Ben and Lola Greenberg on August 7, 1952, setting annual dues at $52. Just three months later, the founders identified a building in which they could hold services: Community Methodist Church in Reseda, whose own leaders were eager to raise funds to build a new church. Temple Judea's first Shabbat services were held on November 7, 1952, led by Rabbi Alfred Wolf of Wilshire Boulevard Temple with eight families in attendance. 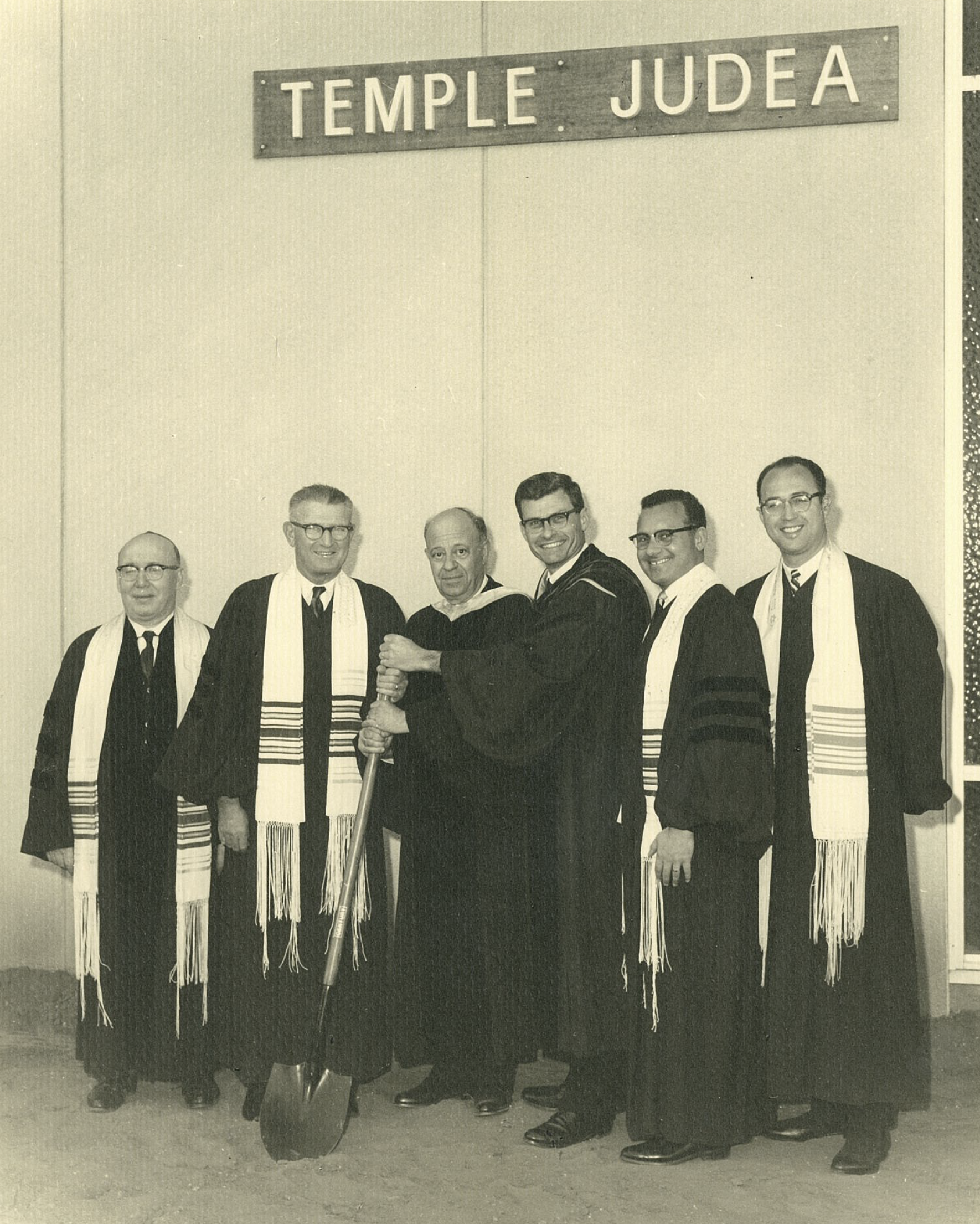 In just a few years, membership in Temple Judea had swelled to 175 families with 294 children in religious school. Facing a severe space shortage - a familiar theme - the congregation launched an extensive search to locate a facility of its own. In 1958, the temple realized its dream of "a place to belong" with the purchase of a large lot with three ramshackle buildings on Lindley Avenue in Tarzana. Rabbi Harris Hans Hirschberg came to Temple Judea that same year, bringing with him a commitment to growing "onward and forward." In 1962, Cantor Gerald Miller was hired to serve first as a part-time and later a full-time cantor. The time was ideal for Temple Judea to become a leading Reform house of worship in the community; the San Fernando Valley was experiencing a tremendous population serge with many Jewish families leaving urban life and retreating to the suburbs.

The 1970s were an exciting time for Temple Judea as it became a leader in social action programs under the guidance of Rabbi Steven Jacobs. In 1974, Temple Judea made Reform Jewish history by electing the first woman to the presidency. The Havurah program was launched to maintain a haimish feeling among the growing congregation, which now numbered 700 families. Natalie Smolens was hired in 1975 to create and direct the temple's toddler program which later became our Parenting Center. Temple Judea became a prominent player in the Jewish community's commitment to tikkun olam. Congregants helped sponsor Vietnamese refugees, hosted 30 farm workers from the San Joaquin Valley, and supported the Refusniks of the Soviet Union.

The congregation's next spiritual leader, Rabbi Akiva Annes, came to Temple Judea in 1984 with experience, creativity and humor. He was also a matchmaker - one of his greatest gifts to Temple Judea was the people he brought to help carry out his mission. Today, we continue to be the beneficiaries of his legacy in the quality of our current leadership, including Rabbi Don Goor, Rabbi Bruce Raff and Nursery School Director Margie Ipp. Temple Judea initiated a major capital funding campaign to build a state-of the-art Early Childhood Center to attract young families. Social action continued to play an important role in the spirit of the temple. During the mid-1990s, the synagogue joined with the Valley Interfaith Council to provide housing, job assistance and meals to the homeless. Various new liturgy and instrumentation were added by Cantor Susan Caro including a guitar, a piano and healing services.

After steering a successful course for 13 years, Rabbi Annes retired and left the temple in the talented hands of Rabbi Don Goor. Installed as senior rabbi in 1997, Rabbi Goor set out to create a spirit of holiness at Temple Judea by recognizing the importance of its past and making its dreams new again. Under his leadership, the temple introduced a new style of worship which brought the clergy closer to congregants during services. During his tenure as Senior Rabbi, Rabbi Goor demonstrated his determination to strengthen the synagogue in two further areas: as a learning community and as a caring community. Rabbi Goor has served on the faculty of Hebrew Union College in Los Angeles, teaching second and fifth year rabbinic students, addressing topics that related to the practical aspects of being in the clergy.

In 1999, a Jewish neighbor in crisis reached out to Temple Judea. Temple Solael in West Hills was facing bankruptcy and almost certainly would have to close its doors. Following a lengthy exploration process and congregational meetings, Temple Judea decided to merge with Temple Solael to come to the aid of fellow Jews as well as to provide new space for our continued growth in the West Valley.

As our congregation grew, so did the need for additional clergy and spiritual leaders. Cantorial Soloist Mark Britowich joined the temple in 2000 bringing with him a broad background of Jewish, liturgical and secular music. Rabbi Daniel Moskovitz joined Temple Judea in 2000 as assistant rabbi, having previously served as an education intern at the temple in 1998 and an intern for several years at nearby Temple Kol Tikvah. In 2001, Rabbi Karen Bender was hired as associate rabbi, bringing with her a passion for social concerns as well as a strong rooting in classical texts.

Rabbi Cantor Alison Wissot joined Temple Judea in 2004 as our cantor, bringing her extraordinary caliber of voice, joyful spirit and passion for Jewish learning. She is dedicated to revitalizing worship and integrating the ancient sounds of Jewish tradition with contemporary music; her background in theatre brings life and energy to synagogue experiences. That same year, Ellen Franklin joined us as our Executive Director, bringing a new dimension to administrative and strategic leadership.

In 2007, Temple Judea took a dramatic step to launch a capital campaign to transform our two campuses into one site through a major building program. After several years of due diligence by the Long-Range Planning Committee, a professional team of architects and building planners were hired to lead Temple Judea into the next phase of its life. The project's name - Legacy; Building Community for Generations to Come - aptly describes the goal of this significant undertaking. Legacy is our chance to continue Temple Judea's commitment to those who came before us, to meet the changing needs of today's congregants, and to ensure our commitment to the generations to come.

After two years of construction, we moved back onto our rebuilt campus in 2011.  We now enjoy state of art worship spaces, beautiful common spaces and courtyards, updated offices and classrooms, and renewed feeling of spirituality and sacred space.